Life is messy, and sometimes, it blows up in your face.

In Rebekah Gregory’s case, life blew up when the first of two bombs detonated three feet behind her at the 2013 Boston Marathon.

Gregory spoke at Dallas Junior Forum’s Spring Event at Belo Mansion Wednesday, two days before the third anniversary of America’s second largest terrorist attack. She described the scene as she and her son watched for a friend to cross the finish line.

“It was my 26th birthday weekend, my first time (in Boston), and I was watching a friend run,” Gregory said. “I was on the sideline eating chocolate covered pretzels wondering why anybody in their right mind would ever, ever run 26.2 miles for fun.”

“We started out that day at the 17 mile marker, and someone in our group wanted to get closer to the finish line so we could see our runner cross,” she said. “As we made our way closer through the crowd … my little boy started to get really bored.

“I told Noah to sit on my feet and play in the rocks like … a scientist. There were so many people there, and I didn’t want Noah to get lost in the crowd.”

That is where Gregory’s five-year-old was when the bomb went off.

She said she looked down and saw that she was on fire.

“My (leg) bones were next to me on the sidewalk, and I had no clue where my little boy was,” Gregory said. “When I lifted up my hand … I was able to see all of my bones exposed and my skin peeled back to my wrist. I remember all those moments, and that’s the hard … part about getting up every day, and that’s the hard part about this week – remembering. Even though it was three years ago, it seems like yesterday.

“Because of the decision I made to sit [Noah] on my feet, doctors say that is what … saved his life. Had he been standing beside us … he would have died.

“The bomb exploded from the back, and all the debris … nails … shrapnel … and BB’s, went leg level. I got to take the brunt of the explosion and take everything in the back of the legs. It saved my little boy. It was a true miracle.

“He had a cut to the bone on his right leg that they were able to stitch up,” she said. “A piece of shrapnel cut his head, but he is running around playing basketball and baseball and loving his life.

“Life is hard, and it can get even harder. When I woke up in that Boston hospital, I had no idea what was in store. One day, you’re sitting on the sidelines, eating your chocolate covered pretzels, minding your own business, and the next day you’re staring at four blank walls wondering, ‘What in the world happened to me?’ and ‘Where do I go from here?’”

Gregory said that when she awoke from a drug induced coma, she could not see her lower body.

“My mom, who had flown in from Texas, took a picture to show me that I still had legs,” she said.

Gregory spent 39 days in a Boston hospital before flying by air ambulance to Texas where she continued hospital treatment for another 26 days. She said some days doctors would want to amputate her leg and then they would decide they could save it.

“And I’m thinking: ‘I look just like a shark just ate me for lunch, but if you want to save this, I trust your judgment.’ I had three huge chunks taken out of my left leg. I had shrapnel injuries up and down my right leg.

A year and a half later after 17 surgeries and 65 operations, Gregory said her leg was no more her leg than on the day of the bombing.

“When life is hard, and it gets harder, that is when there are decisions that we have to make,” she said. “One of mine was to decide at 26 years old to live the rest of my life as an amputee. It was a struggle for a lot of people, but it wasn’t a struggle in my eyes because I had already confronted that fear a long time ago.”

She said the emotional side of her journey has been harder than the physical side.

My mom said, ‘Rebekah, you’re a woman. You’re going to want to wear dresses, shorts and skirts and feel pretty, and I’m scared to death that you’re going to lose all of this.” I calmly said to her, ‘Mom, if I lose myself because of what’s happened to me, then I deserve that.”

Gregory said the obstacles in people’s lives and what happens out of their control are not always fair. Six months before the Boston Marathon bombing, she was robbed at gunpoint in a Walmart parking lot. Noah was with her then too. She said people should not to let a tragic event define them.

“It defines who you go on to be,” she said. “My leg doesn’t define me; it means that I have a permanent mark of survival, and that I was three feet from that bomb and that I’m going to live my life in spite of it.”

She assured her mom that she would not be ashamed of losing her leg.

“No way. I am going to own my circumstances; I am going to rock a fake leg. You better believe I’m going to have it pedicured every single day. I amputated on Nov. 10, 2014. I said then it was like a bad boyfriend I needed to cut out of my life. It was holding me back from the potential of what I could be. On [that day] it was such a relief to wake up from surgery and not have that burden there.””

She said decisions to cut out things holding us back are hard ones to make.

“Hold onto the important stuff, she said. “What was important to me was my family that stood by me the last three years and that my leg was the safety net for my little boy. I’m not going to spend time feeling sorry for myself when he is the one running around like normal. I’m a parent; I don’t have the option to feel sorry for myself.

“Two brothers tried to destroy my entire life when they brought two bombs to the Boston Marathon, Gregory said. “They took away my leg; they took away my safety. They took away the experience of being able to sit in a crowded room and not constantly look over my shoulder thinking somebody is going to be there trying to kill me.

‘I hope that as the years pass, there will be more healing for everyone involved,” she said. “On April 15 my heart is going to be with the rest of the survivors and praying for the victims’ families like it always is, because that is what is important.”

Although Gregory had planned to spend this April in Texas trying to keep life as normal as possible, she changed her mind and came to Dallas to speak at Dallas Junior Forum’s Spring Event.

“I’m so excited to be a part of this today because these ladies are absolutely phenomenal,” she said. “When I read about the work that they do and the hours that they put in – that is leading a meaningful life. Women’s inspiring other women is so important and powerful. Anytime I can be involved in something like this, I’m 100 percent all for it.”

Since receiving her prosthetic leg, Gregory has spoken nationwide and abroad. Last year, she testified in the trial of the remaining bomber “Jahar” Tsarnaev. She recently remarried and is starting a nonprofit organization called Rebekah’s Angels which will help children who suffer with Post-traumatic Stress Disorder (PTSD). She and Noah both suffer from the condition. Next April, just before her 30th birthday, she will publish her first book. 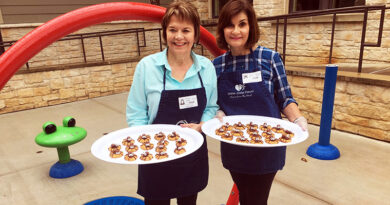 Kleinert to Speak at DJF Luncheon