Wilson was diagnosed in March 2015 – but not during her first round of tests. The cancer was only found when she sought a second opinion.

At the luncheon, she will speak about her experience with the disease and the importance of early detection and multiple screenings.

“You have nothing to lose if both opinions match up for the good, and everything to gain if something that was missed is found, which does happen. Early diagnosis is key,” said Wilson.

The Celebrating Women Luncheon, now in its sixteenth year, has raised more than $26 million in support of Baylor Scott & White Health – North Texas, and their fight against breast cancer. These donations have supported advanced diagnostic equipment, innovative clinical research, and quality care for Baylor patients.

Aileen Pratt will chair the luncheon, with Gloria Eulich Martindale serving as underwriting chairman. Diane and Joel Allison will serve as this year’s honorary chairs. Each year, approximately 1,200 passionate men and women attend the Celebrating Women luncheon in a show of support for Baylor’s efforts to fight the disease.

“Thanks to the generous support we’ve received over the past 16 years, we are not just cheering on breast cancer patients from the sidelines. We are actively fighting alongside them,” said Rowland K. Robinson, president of Baylor Health Care System Foundation. “Every donation in support of Celebrating Women has had a positive ripple effect on breast cancer treatment and care for our patients and their families. It’s truly inspiring to see our community come together year after year with such tremendous enthusiasm for this cause – one that touches us all.” 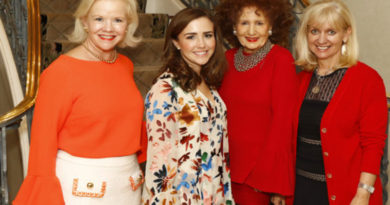