Highland Park is familiar with the start of the girls soccer playoffs, but the Lady Scots aren’t accustomed to their runner-up district finish.

That means HP is the No. 2 seed from District 10-6A, which is significant in terms of bracket positioning. It means the Lady Scots could meet nationally ranked Sachse in the second round.

But first, HP will launch its postseason run against Irving Nimitz at 7:30 p.m. Thursday in a Class 6A Region II bi-district game at Highlander Stadium.

The Lady Vikings (10-5-2) earned the third seed as part of a logjam in the middle of the District 9-6A standings. The Lady Scots (18-3-1) enter the playoffs with momentum after defeating their final three regular-season opponents by a combined margin of 18-0.

However, HP lost to both Mesquite Horn and Lake Highlands during district play, and finished a game behind Horn for the league title.

So the winner of Thursday’s game will meet either Sachse or Harker Heights in the area round. If that’s an HP-Sachse matchup, as expected, it will feature two teams accustomed to making deep postseason runs.

After all, the Lady Scots were the state runner-up in their first season at the 6A level last spring, while Sachse has won four consecutive district titles and is unbeaten this year despite losing two top players to injury.

As for Thursday’s game, tickets are $5 for adults and $3 for students at the gate, and 100 fans will receive a free T-shirt. 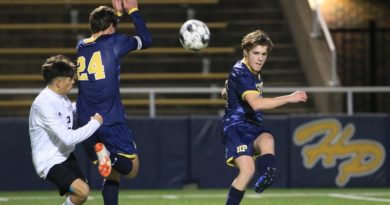