GARLAND — Hillcrest had no match for the speed and experience of West Mesquite during a 62-35 loss on Tuesday in a Class 5A Region II bi-district playoff game.

Four players scored in double figures for the Lady Wranglers, including a game-high 14 points from guard Tamia Cunigan, who caused several first-quarter turnovers as part of West Mesquite’s up-tempo game.

“They have incredible team speed, which we had not really seen all year,” said first-year Hillcrest head coach Reggie Bibb.

“We were playing catch-up from the first couple of minutes of the tip,” Bibb said. “That’s hard to do with your starting point guard out against a senior-laden squad.”

Hillcrest (20-10) calmed down in the second half and played much better against West Mesquite’s press, going on a 7-0 run at the start of the fourth quarter.

Down 58-28 with just over two minutes remaining, Ericka Scott made a baseline jumper followed by a steal and layup by DJ Walker. Suzy Njoku finished a 6-0 run for the Lady Panthers with two free throws.

“This was great experience for us,” Bibb said. “We start three sophomores and a junior, and this really was a season of growth.”

Bibb was proud about what his team accomplished this season, and excited about the future of his young team.

“We had two main goals this year,” he said. “First, win the 11-5A district, and we were in the hunt until the last week of the regular season. Second, we wanted to notch 20 victories, which we were able to do.”

Tatyanna Scott and Njoku, both post players, each scored nine points to lead the Lady Panthers, followed by Brittany Jackson and Walker, who put in seven apiece. 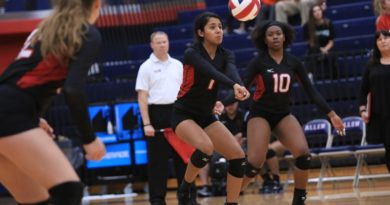 Hillcrest Surges Past Molina, Into Area Round