The white chapel on Good-Latimer Expressway in southern Dallas is a small church, but mighty, with its full-length cathedral windows, nine wooden pews, and dainty décor.

“Not all who wander are lost,” reads a picture on the back wall of SoupMobile Church, which opened its large wooden doors to the community on Nov. 1.

It’s a fitting message for all who enter. At SoupMobile Church, the homeless are the members, and this is their sanctuary. Senior pastor Lisa Ernst made that notion clear at the grand opening.

FOUNDED: 2003
MISSION: To feed, shelter, and minister to the homeless.
CHRISTMAS: Every year SoupMobile also helps 500 homeless families and individuals celebrate Chirstmas by putting them up at the Omni Hotel for the night. They recieve new clothes and gifts, and enjoy a banquet held in their honor. Go to soupmobile.org to find out how you can help. More than 2,500 volunteers are needed each year.
FOLLOW: Facebook, Twitter

“One thing I told them that day was that this is not my church,” said Ernst, who was born and raised in Dallas. “This is your church and I’m your servant…I’m still emotional and happy for the homeless to take ownership of this.”

“We felt like there had to be more for the homeless,” said David Timothy, known as the Soup Man in the streets of Dallas. “Most people have their own home church where they can go and feel welcome, feel comfortable, get services, and do fun activities. But if you’re homeless you don’t have that. That’s why we felt like we had to build a physical structure so the homeless would have a home base.”

Timothy grew up in Detroit. Though he was never homeless as a child, he experienced hunger, often wondering if he’d see the next meal. That sparked a passion for giving to the homeless.

Timothy said that during his 30-year career as a pension consultant he didn’t have the chance to serve the homeless how he wanted. He moved to Dallas in 2000, and three years later, after a lot of praying, founded the SoupMobile.

The nonprofit’s mission is to feed and shelter the homeless. In its first year, the SoupMobile served 5,000 meals. Today, it serves more than 200,000 per year. In its 13 years of service, SoupMobile has gained a reputation for providing the love of family along with the meals.

“We literally have this up close and very personal relationship with them,” Timothy said. “We call them our family of friends. We’re all one in Christ. We’re with them all the time and constantly telling them what’s going on.”

That type of rapport is what drew Ernst to SoupMobile initially. The Dallas native has been an ordained minister for four years, a calling she didn’t quite understand until now.
“I truly believe that I had to go through everything I went through to get to where I am today,” Ernst said.

Her story is one of redemption. She said that Christ found her when she hit a low point, and that’s when her life turned around.

In 2013, she joined SoupMobile as a volunteer for its thrift store and mobile-tent ministry. That was when she and Timothy crossed paths.

Over time, they discussed the possibility of opening a church for their “family of friends” at SoupMobile. Timothy offered Ernst the position of senior pastor. While Ernst didn’t feel qualified, Timothy disagreed.

“For many of the homeless that she serves, they’ve taken some wrong turns in their lives,” Timothy said. “She’s the perfect one to say, ‘I do know how you feel. I’ve been there. My job is to bring you out of the wilderness.’”

That was two years ago. At the grand opening, Ernst’s heart was full. The church raffled off mountain bikes and gave McDonald’s gift cards and gift bags containing hygiene products and protein bars.

“The day before we opened, I was by myself sitting in the sanctuary,” Ernst said. “I was just in awe. Finally, it has come to fruition. Here it is.” 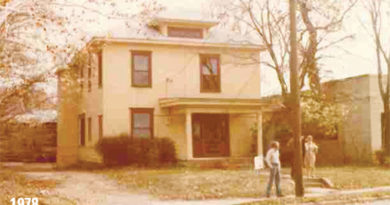 Putting Their Money Where Their Hearts Are 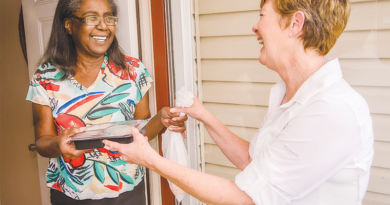 Four Days of Meals on Wheels