ARLINGTON – Highland Park’s second chance against Waco Midway went pretty much like the first one.

The Scots couldn’t keep up with the fast-paced offense of the Panthers, resulting in a 50-31 loss at AT&T Stadium that eliminated HP in the area round of the Class 6A Division II playoffs for the second consecutive season.

There won’t be a third opportunity against the Panthers, at least not anytime soon, as HP will drop down to Class 5A for the upcoming UIL realignment cycle next year.

The loss also snapped a nine-game winning streak for the Scots (10-2), ending a season in which HP recovered from some early adversity to win its first district title at the 6A level.

“They got better every game and they played with great effort,” said HP head coach Randy Allen. “They’re one of the hardest working teams I’ve ever had. They left our program better than they found it, and they played their hearts out.”

Midway’s Sam Glaesmann passed for 281 yards and five touchdowns, while Joseph Ward caught 10 throws for 231 yards and four scores. In last season’s 35-28 win over HP, the Panthers (9-3) wore down the Scots with a rushing game. But they took the opposite approach this time, in part because of the defensive emphasis of HP.

“We run an offense that’s all about taking what they give us,” said Midway head coach Terry Gambill. “We run a high pace, and we expect from our kids to play at a high level, and then some. When you play Highland Park, you know you have to come in with your best game. It wasn’t perfect, but we did the things to take care of the victory.”

Midway earned its ninth straight victory by seizing momentum late in the first quarter, following a couple of key mistakes by the Scots.

The Panthers trailed 10-7 midway through the first quarter when Zach Haverly recovered an HP fumble at the Scots 23-yard line. Three plays later, Glaesmann threw the first of his touchdown passes to tight end Jake Graham from 20 yards out, which was one of several key third-down conversions for Midway in the first half.

On the ensuing HP drive, Kemp Sauer caught a 56-yard pass from Henry Allen, but the Scots settled for a field goal to tie the game at 10.

Early in the second quarter, Glaesmann and Ward connected on a 14-yard scoring pass to give Midway a 20-10 lead. A penalty on the kickoff pinned HP deep in its own territory, and a third-down sack by Anthony Flowers resulted in a safety.

Midway’s Dae-Dae Walker brought back the resulting free kick to the HP 26, and Korey Chatman capped that short drive with a 1-yard scoring plunge that stretched the Midway lead to 29-10 early in the second quarter.

The Scots never recovered from that hole, despite an impressive 75-yard touchdown drive that ended with a 32-yard pass from Henry Allen to Stephen Dieb.

The Panthers answered with an 83-yard possession, with Glaesmann hitting Ward on a 25-yard scoring strike to give Midway a 36-17 advantage.

HP missed a chance to trim the deficit just before halftime. An acrobatic 37-yard reception by Jack Toohey set up the Scots at the Midway 25, but the drive stalled on downs.

“[Glaesmann] was very accurate. Every time we would get them in a third-down situation, they would come up with a great pass and catch,” Randy Allen said. “They just wore our defense out. We couldn’t stay on the field long enough offensively to keep our defense rested.”

The teams traded touchdowns in the third quarter. Henry Allen found a leaping Chris Buell for a 24-yard touchdown that cut the Midway lead to 36-24. However, the Panthers gained momentum right back, as Glaesmann and Ward connected on another 25-yard scoring strike.

J.T. Dooley returned the ensuing kickoff 72 yards to trim the deficit back to 12 points for HP, but the Panthers answered again when Glaesmann found a wide-open Ward on a 37-yard touchdown pass just three plays later.

The Scots drove into Midway territory twice in the fourth quarter, including once inside the 10-yard line, but couldn’t convert either time, and the Panthers went into ball-control mode.

“We knew what kind of game it was going to be. We just couldn’t miss opportunities,” Randy Allen said. “We got some big plays every once in a while, but we just couldn’t get close enough at the end to put some pressure on them.”

The big play for the HP defense came on the first play of scrimmage for Midway, when Glaesmann fumbled on a scramble and John House recovered the ball in the end zone for the first Scots touchdown. It was the second score in as many weeks for House.

Henry Allen finished with 351 passing yards and two touchdowns, but HP completed just 18 of 38 throws along the way. That equates to almost 20 yards per catch, but not enough of those reached the end zone.

Sauer had four receptions for 117 yards, all in the first half, while Buell caught a team-high six passes for 93 yards.

HP’s offensive inconsistency could be traced in part to its normally reliable rushing game, which managed just 57 yards. The Panthers limited Dieb to 22 yards on 10 carries.

Eric Clayburn, who scored four rushing touchdowns during last year’s meeting, again was the workhorse for Midway with 33 attempts for 148 yards. 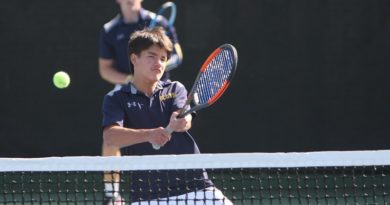