When they toured the only teen shelter in Dallas, they noticed the library needed work.

“They showed us around the housing and the complex and everything, and that was one of the rooms we saw and we decided we wanted to help out,” said Girl Scout Alexa May.

Before they began the project, there was a lot of clutter and the books were disorganized, Girl Scout Meghna Jain said. There also wasn’t a large selection of books for teenagers.

Paloma Belmarez, youth volunteer coordinator at Promise House, said before the four students took on this project, she was too embarrassed to even show the library during tours of the shelter. But she said the girls made a big difference.

“These are the best teens to work with,” she said. “They treated it like a plan almost, and we’ve had many people attempt to do the library but they’ve never been able to sustain it. These ladies were able to do it from start to finish and even beyond that to check in on it. And I just couldn’t be prouder.”

All of the girls have different talents and skills they brought to the project. For example, Sara Dorward reupholstered all of the library chairs by herself.

While working in the Promise House library, they interacted with the teens. Grace Laber said being the reading buff that she is, she was able to have a book discussion with one of the residents.

“From day one, these girls were very attached to that room and took it as a personal sort of goal of theirs to show what it could be,” said parent Sandy Laber. “And all of these girls are very inspired by reading and by the kids. All of their talents got blended together in this room.” 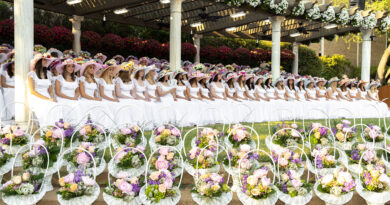