Stereotypes say seniors rue the day technology came to rule the world, wanting no part in the age of Apple.

Event coordinator Letty Valdez got things started by explaining where to find the battery status and WiFi connection, as well as where to adjust the volume and place headphones.

Next came an explanation of Siri.

“I’ll tell my iPhone to Google, ‘Where is the nearest mall or restaurant?’” Valdez said. “You can do anything.”

“Can it tell me about available old men?” asked resident Venetta Cronin.

As iPad owners peered earnestly over their screens, it was time to break into groups. Their mission? Downloading Unblock Me, a free puzzle game.

Employees milled about, helping residents with technical tasks. Radford showed Bob Patchen how to make a photo of his grandson his wallpaper, much to his delight.

“How about that!” he laughed.

Al Cloud, who likes to use his iPad for books, made a handy metal contraption that cradles his device as he reads in bed.

“I put these cushions on so it wouldn’t harm the iPad,” he said, pointing to felt pieces on the inside. “It works nicely. All I have to do is flip the page.”

Cronin, 84, has had her iPad for a year, and, as a former history teacher, likes to use it as an encyclopedia for questions about medicine or history.

“I just go to Google, which I love,” she said. “And you just don’t go to any source because they can tell you all kinds of malarkey.”

“He’s a son of a gun because he managed to buy acres of Indian land at dirt-cheap prices,” Cronin said. “Davy Crockett is my new hero. He didn’t want them to persecute the Indians. I should look up Davy Crockett — to heck with Andrew Jackson,” she said, revising her search.

“If you want to see his brown locks, you can make them really big,” Radford said as she zoomed in on a photo of Crockett.

Valdez holds the iPad classes monthly, and, for now, they’re sticking to the basics.

“It’s important for them to learn new things,” Radford said. “Our hope is that with practice, they can become more comfortable.”

This story originally appeared in the September 2015 issue of Preston Hollow People. 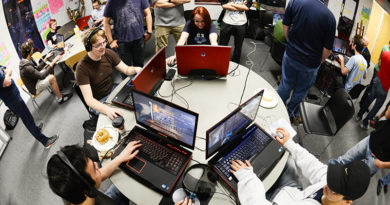