Tom Trigg stepped into the role of Highland Park ISD superintendent on July 27, but the real work is just beginning.

Trigg, who stayed in the Blue Valley School District in Kansas until July 24 to help finalize a new budget, now brings that spirit of dedication and tenacity to Highland Park.

“When you hear Highland Park, you think of the school district and quality,” he said. “One thing I think you have to look at is the match. Blue Valley is also a suburban, high-performing district, but the difference is there are three times as many students as Highland Park. I looked at the skill set that I have, and there was a really good match.”

Among those similar qualities, Trigg lists high academic scores and values as well as community involvement and the quest to continue improving.

“First, I want to be a really good listener and understand what it is that Highland Park really values. I have a lot of learning to do,” he said.

That’s not to say he doesn’t have priorities.

“There are some broad-brush areas every district needs to be looking at, and one of those is innovation,” he said. “We want to be creative, innovative thinkers to increase the quality of education.”

Specifically, Trigg spoke of applying that sense of innovation to integrating technology in schools. His forward thinking convinced many board members that they made the right decision in choosing Trigg to replace Dawson Orr, who left this summer for a faculty position at SMU.

“There’s a great alignment. One of the aspects of getting to know him … was his experience in all levels, from teaching and coaching to his administrative days,” HPISD school board president Joe Taylor said. “He’s done it and seen it from all different perspectives and has a wealth of knowledge and experience.”

“Blue Valley went through something very similar eight or 10 years ago. I have a pretty good understanding of those kind of controversies and how they come about and how to work through them,” he said. “The key is valuing the opinion of people and being very open, honest, and transparent in the discussion process. You’re going to have people that have strong feelings on both sides of an issue. It’s a spectrum of opinion.”

Trustees as well as campus faculty and staff members have already been able to see some of Trigg’s philosophies in action; he visited each campus on June 1 after he was announced as the lone finalist for the job.

“He comes from a high-performing district and clearly understands the expectation of excellence,” Taylor said. “In the weeks since we’ve named him the finalist, he’s started to get engaged in the process, going through and learning about the district and trying to understand the history and traditions.”

HPISD Wants Your Feedback on Bonds 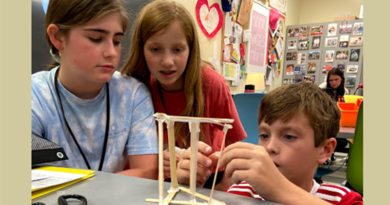