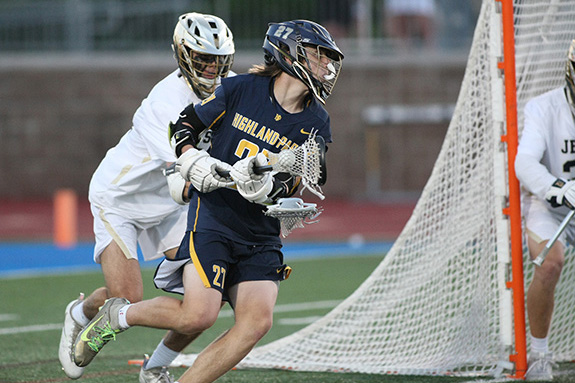 While Highland Park was playing with its full squad for the first time, Jesuit was still shorthanded. That disparity contributed to a lopsided result, as the Scots rolled past the Rangers 63-50 in a nondistrict clash on Tuesday.

HP had the services of varsity returnees Mitchell Kaufman and Campbell Brooks, who were added to the roster after their football season finished over the weekend. Both started and made significant contributions before fouling out in the fourth quarter.

Brooks had nine points and played some tenacious perimeter defense, while Kaufman tallied five points and a game-high six rebounds.

“They’ve been staying in shape. They just needed one day of practice and they were ready,” said HP head coach David Piehler. “Their leadership and experience showed.”

Meanwhile, Jesuit played without Michael McReynolds, its top scorer from a year ago, who sat on the bench in street clothes because of a foot injury.

As the Rangers (0-2) shuffled their lineup, their shooting woes resulted in just 20 points after three quarters. Combined with a 28-18 rebounding disadvantage on those missed attempts, the result was catastrophic.

“We’re still coming together. We have a lot of guys in new roles this year,” said Jesuit head coach Chris Hill. “That’s why you play these games. As long as we learn from it and build on it, then it’s all good.”

The Scots (3-3) recovered from a slow start with a 13-1 run in the second quarter to open up a 25-10 lead. The advantage was stretched to 38-15 after halftime, as the Rangers didn’t connect from the floor in the third quarter until a putback by Sam Truxal with less than a minute remaining.

Jesuit never threatened after that, as HP was able to slow the pace with a big lead. The Scots scored almost half of their points from the free-throw line, where they connected on 29 of 40 shots.

Ryan Michael paced HP with 14 points, while Pete Davis added 10 and Drake Turnbull finished with eight, all from the line.

For the Rangers, Truxal led the way with 19 points and Tyler Schlapkohl contributed nine, but both of them were scoreless at halftime.

The Scots, who placed fifth in the HP Scot Classic tournament over the weekend, will next travel to McKinney on Dec. 2. The Rangers will travel to Plano on Saturday.