She refers to it as her life’s calling, and it’s hard to dispute Ches Hudel’s claim about her work in adapted aquatics when you consider she’s been doing it for 67 years.

Hudel makes the journey about five days each week from her home near White Rock Lake to the Park Cities YMCA, where she helps teach therapeutic swimming lessons for people with a variety of afflictions, such as autism and Down syndrome.

And at age 83, she’s still as passionate about her work as ever.

“I’ve never really thought of it as a job,” Hudel said. “I still love it.”

Her compassion and advocacy for people with disabilities hearkens back to when she was 4, and playing hide-and-seek with a friend in a dry-goods store. Her friend had a deformity in her face and hands. Another young girl approached them, but was cautioned by her mother that she shouldn’t play with that “pig girl.”

Hudel noticed other incidents during her childhood that prompted her to study child development. After graduating from Bandera High School at age 16, she attended Texas State College for Women (now Texas Woman’s University) in Denton, where she was asked to help children with cerebral palsy and birth defects.

“We took these kids swimming and miracles happened,” Hudel said. “I saw smiles and movement that the children could not do on dry land.”

The Oklahoma native taught for more than two decades at Ridgewood Park Methodist Church, all the while continuing to help special-needs children in the pool. She taught students with multiple sclerosis, volunteered at Children’s Medical Center and the Red Cross, and became a lifeguard instructor at the YWCA.

Since 2002, she has been involved in adapted aquatics at the Park Cities YMCA, helping to build that program into one of the most prominent of its kind in the state.

“I don’t think there would be a program without her,” said Bobby Timmer, aquatics director at the Park Cities YMCA. “She’s very instrumental to this program. She has these great relationships built.”

Hudel — who stays in shape by swimming laps for an hour most mornings — works with children and adults in their 30s, and has seen numerous benefits for her students, such as increased confidence and motor skills. She cites a 5-year-old boy with Down syndrome who was at the pool to watch a sibling, and had trouble walking and talking.

“It was sad to see him not doing anything. I told his mother she needs to get him in the pool. Now he swims all over the place and just loves it,” she said. “Through the confidence of swimming, it’s amazing how they develop.” 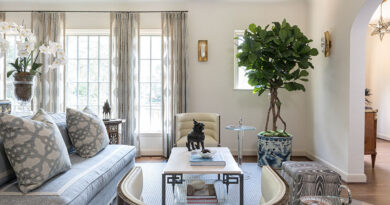 Turn Your Home into a Personal Getaway with Travel-Inspired Décor

Can Marc Lenahan Really Get NorthPark Parking Lots Shut Down?