HP Village was home for 25 years

After 25 years as a tenant in Highland Park Village, Gerald Tomlin Antiques has moved its fine furnishings to Slocum Street in the Design District.

“We just kind of ran out of room,” Joanne Tomlin said.

The shop has always been a family operation, with Joanne and her husband, Gerald, at the head and their three sons — Gerald Jr., Edward, and Christopher — fulfilling the rest of the duties.

The Tomlins have had a showroom on Slocum for some time, but enjoyed having a storefront in the Village and close to customers. Just as they were nearing their need to transition to a larger space, tragedy struck.

Gerald Jr., the family’s eldest son, lost his battle with cancer in April.

“Before he passed away, we had talked about moving,” Joanne said. “He anticipated that he might not be with us long, so he kind of pushed us.’”

Joanne had also been on the board for the Village, so when the family was ready to move, the Village helped to make the transition as simple as possible.

“We are going to miss them,” said Becki Snow, general manager of the Village for more than 25 years. “It was always fascinating to hear Joanne or one of the boys talk about a new item they just received.”

In the spirit of new beginnings, the family packed up their fine consignment and estate pieces, and prepared for the move.

“It was nerve-wracking, just because we’ve got a lot of stuff that can get broken,” Ed said. “But after years of having a system in place, it makes it a little easier. We had a vision in mind of what we wanted to do.”

“There’s history in antiques,” she said. “You see how people lived.”

A few of Joanne’s favorite pieces in the shop are two marble side tables once owned by the Duke and Duchess of Windsor and a set of 10 dining chairs dating back to 1750.

Joanne graduated from Ursuline Academy and SMU before teaching English at Thomas Jefferson High School. She didn’t get into antiques until meeting her husband, who traveled with “Antiques Roadshow.”

Together, the family found their different roles in the business.

Despite life’s changes, the Tomlins will always think of their years at Highland Park Village with good memories.

“It was a bad situation that they made very comfortable for us,” she said. “Our sons grew up there, and they were always fond of and dedicated to the Village.”

This story appears in the July issue of Park Cities People. 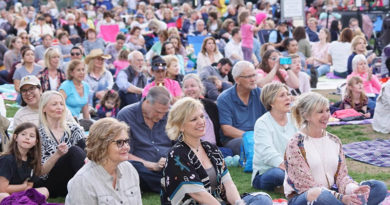 Memorial Day Weekend To Feature “A Day in The Arts”