Music can have some powerful effects, and that’s certainly the case at Belmont Village Senior Living. During two Fridays every month, the residents of the senior living home, as well as outside community members, gather in a room for Carolyn Dobson’s class.

Dobson is a board certified music therapist who instructs music therapy classes for people suffering from Parkinson’s disease.

Music can help slow down the progression of the disease, Dobson said.

“In general, the elements of music travel in the brain differently than just verbal commands,” she said. “But when you pair things with rhythm, rhythm cues your motor cortex in your brain to fire more efficiently, so that your muscles fire more efficiently and appropriately, and it has the ability to bypass disease and injury.”

Patricia Will, founder and CEO of Belmont Village, which opened last year in the Turtle Creek neighborhood, said the class has been successful. Residents often tell her they can feel a difference after participating in multiple sessions.

During one recent class, Dobson played music over the loudspeaker or strummed her acoustic guitar. The music ranged from some Beatles tunes to American folk songs.

The recorded music was 122 beats per minute, she said, and is only used for the exercises the participants do while sitting down.

However, when they engage in standing exercises, Dobson switches to a slower beat by strumming her guitar, so the participants can better keep up.

“The difference is when I’m playing my guitar, I can alter my rhythms to meet the needs of the client better,” she said. “Recorded music I do specifically so that people can go home and practice. You can’t have me everyday in your life, so you need a way to have carryover. So the more often you exercise to music to the same thing, the more your muscles remember it.”

During the class, Dobson instructed the participants to tap their toes, move their arms, shake their maracas, and sing along with the music.

Singing along can help with the participants’ breath support, which then can better help with their speech. Often times, people suffering from Parkinson’s disease have slurred and unclear speech.

The participants in the class have experienced different stages of Parkinson’s disease.

“My goal is to meet everyone’s needs,” she said. 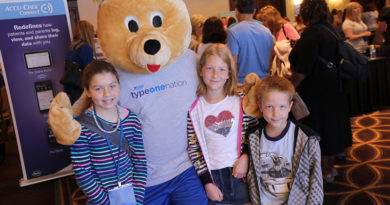