Van Cleave is stepping down as CEO of Balfour Beatty Construction. When company officials toured Dallas Heritage Village in July, scouting a location for his retirement party, they saw that the village’s bandstand was in a state of disrepair.

First built in 1974, the bandstand served as the logo for Dallas Heritage Village for 25 years and has been the center of events, musical performances, proposals, and weddings.

“It was just one year ago that the bandstand’s future was uncertain,” Dallas Heritage Village interim executive director Melissa Prycer said in a press release. “During routine maintenance, staff discovered serious wood rot at the top of the columns. The bandstand was no longer structurally sound, and we made the decision to remove the roof in late December for our visitors’ safety and to prepare the bandstand for repair. As we continued to examine the bandstand, the costs for full repair kept rising. What had initially looked like a $30,000 project more than tripled in cost. As much as we loved the bandstand, we weren’t sure we could raise the necessary money.”

Dianne Clifton, Balfour Beatty’s director of brand marketing and communications, saw the bandstand sitting in pieces on the ground during that July tour, and she asked Helen Muncaster, Dallas Heritage Village’s director of sales, what was up. Muncaster explained the situation and expressed the staff’s concerns about funding repairs.

“That’s when we knew we had found the perfect gift for Robert,” Clifton said.

“We were truly excited when we realized the opportunity to restore the bandstand as a tribute to Robert,” said Mark Layman, Balfour Beatty’s president and incoming CEO. “Robert and his wife, Sharon, have both been consistent supporters and personally engaged in the growth and needs of Dallas for so many years. It is the perfect gift to honor both Robert’s years of service to Balfour Beatty and our great city.”

“We thank you not only for this amazing gift, but also for your partnership and all that you do and mean to this community,” she said. “And we hope that Mr. Van Cleave’s retirement years will bring as much joy to him as he has brought to others.” 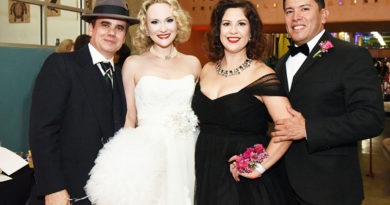 Rocked Around the Clock