Highland Park will play in the state’s largest classification for football and other sports beginning next season.

As part of the UIL’s biennial realignment process, HP will be elevated to the new Class 6A for two years starting in the fall of 2014, based on enrollment estimates and figures released by the UIL.

For the first time on Monday, the UIL released conference cutoff numbers in advance of realignment day, using snapshot enrollment numbers submitted by each public school in the state.

HPISD turned in an unofficial snapshot figure of 2,106 students, which is six students above the 6A cutoff line of 2,100. That will make HP one of the smallest 6A schools in the state for the next two years, if not the smallest outright.

The classification divisions, as well as new district alignments, will be made official on Feb. 3.

“We always thought it could be a possibility, based on previous realignments when we were close,” said HPISD athletic director Johnny Ringo. “With the growth in our enrollment, we knew that eventually we’d be 6A.”

It will be the first time HP has moved up in classification since taking a drop from 5A to 4A in the late 1980s. The school has been one of the largest 4A schools in the state for much of the past 25 years.

“The Scots are always competitive,” HPISD Superintendent Dawson Orr said in a statement. “We look forward to the challenge.”

Now it becomes likely that HP will face much larger schools from the Dallas area in district play. The four largest schools in the state, located in Plano and Allen, have more than 5,000 students.

“We realize the level of competition will obviously pick up,” Ringo said. “We’re fully prepared for it.”

Neighboring schools likely to move to 6A include Jesuit and Dallas ISD schools such as W.T. White, Sunset, and Skyline.

The new classification would also impact other sports such as basketball, baseball, softball, volleyball, golf, and track and field.

The changes will not affect tennis, soccer, swimming, and wrestling, each of which is reclassified separately by the UIL because of the smaller number of participating schools. 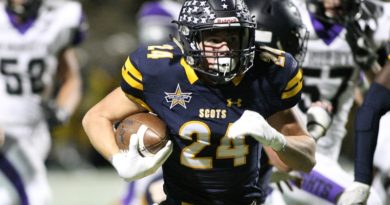 9 thoughts on “HP to Play in Class 6A Next Season”