“It is an immense source of pride to announce that after meeting so many qualified candidates from leading independent schools, the individual ideally suited to build upon the great legacy of this institution is already on campus,” said Randall Fojtasek, a 1981 graduate of St. Mark’s and president of the school’s board of trustees.

Holtberg announced in March that he planned to retire at the end of the 2013-2014 school year. Dini, who has worked at St. Mark’s for more than 19 years, will assume his new duties effective July 1.

“I am deeply honored by the decision of the Search Committee and the Board of Trustees, and I am humbled by the prospect of leading this great institution,” Dini said. “St. Mark’s School of Texas was established with a vision to become a beacon of excellence, and I feel an important responsibility to make sure we carry that legacy forward.”

Dini graduated from Houston Strake Jesuit before earning his bachelor’s and master’s degrees from SMU. His career in education began at the John Cooper School in Houston. Holtberg recruited Dini in 1994 to create the comprehensive advancement program that has since guided all St. Mark’s development and alumni relations.

Under Dini’s leadership, St. Mark’s has raised more than $170 million in new contributions and has tripled the size of its endowment to more than $120 million. In addition, he has been integrally involved in the transformation of the campus, helping lead major building projects in 2000 and 2008.

“Our next headmaster brings experience, outstanding personal qualities, a passion for educational excellence, and a deep commitment to our school and our community,” Fojtasek said. 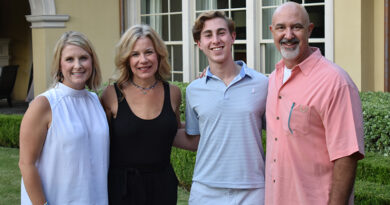 Greenhill Senior One of the Heroes for Children

4 thoughts on “Dini to Replace Holtberg at St. Mark’s”