At age 13, Ariana Luterman has accomplished something many adults have not: completing an Olympic-length triathlon. But Luterman hasn’t completed just one: she is participating in 10 to 15 triathlons every year through her charity, Team Ariana.

Her love of triathlons “started back in second grade,” the eighth-grader at Greenhill said. “A couple of my friends introduced me to the sport of triathlon. Once I crossed the finish line, I knew that I loved it.”

It wasn’t until three years ago that Ariana decided to turn her hobby into a fundraising machine for Vogel Alcove, a nonprofit that provides child care for homeless families and victims of domestic violence.

Ariana first heard of Vogel Alcove when her sister, Gabrielle, decided that she wanted donations to the children’s shelter in lieu of birthday gifts.

“This was really an eye-opening experience for me,” Ariana said. “I felt like I could do something about this. That’s when Team Ariana came in. I realized how much attention I was getting from being the only kid doing adult triathlons. I thought I could turn that attention away from me and on to the Vogel instead.”

Ariana has raised more than $50,000 through Team Ariana for the Vogel Alcove. Donations have come in through her website, as well as sponsors and people buying her “Team Ariana” gear, for sale through her sponsor Champion System.

Along the way, Ariana has made quite a few friends in the world of triathlon, including her coach, Steen Rose. While Rose typically doesn’t take on child athletes as clients, it was Ariana’s spirit and determination that convinced him.

“She’s really impressive and inspiring,” Rose said. “She obviously has a big heart and wants to give back and help others. That’s really neat for anybody, much less a 13-year-old.”

This year, Ariana has been winning awards besides those she gets when she crosses finish lines. She was recognized nationally by Kohl’s department stores, which gave her a $1,000 Kohl’s Cares scholarship, as well as locally — the Greater Dallas Chapter of the Association of Fundraising Profes-sionals showcased her triathlon efforts as a “Youth in Philanthropy” project.

“I hope to do a full Iron Man [triathlon] when I turn 18,” Ariana said. “I know it’s a big goal, but I hope with everything I’m doing I can achieve it.” 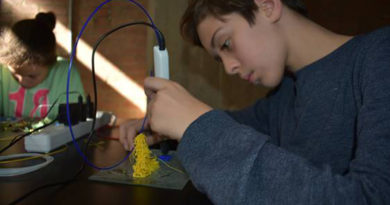 Landlubbers Can Catch a Wave At City Surf Fitness in Uptown