Five years ago today, I walked into the offices of People Newspapers to address my new staff. When the 14 of them (14!) and then-publisher Jason Heid assembled in the conference room at our old place on Oak Lawn, I told them I had written down a few words I had wanted to say. Then I pulled a piece of paper out of my pocket and said, “I wrote those words on a piece of paper that is not this one.”

That was a crazy week. My younger son was born at 3:33 on a Saturday morning. He and my wife came home from the hospital on the following Tuesday afternoon. And the next morning was my first day doing this job. So you can probably understand why I grabbed the wrong piece of paper on my way out the door.

But the time since then has been a blast. This is the longest I’ve ever held a job, and this is where I’ve done my finest work, in my humble opinion. Let’s see where it goes from here.

ESPN to Highlight SMU’s Sordid Past 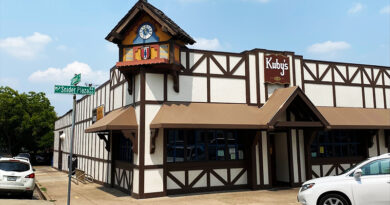 Favorite Places: Got To Drop By Kuby’s Every Trip Back Home

8 thoughts on “What Did You Get Me For My Anniversary?”