The Texas Press Association has announced the winners of its Texas Better Newspaper Contest. For the third time in five years, Park Cities People has won the General Excellence category in the division for the state’s largest weeklies. This time, we were honored for our March 2 and May 4 editions. (We also finished second in that category in 2010 and third last year.) Our other victory today was in the Advertising category — largely, no doubt, due to the “Thump the Jackrabbits” banner that art director Rick Lopez created for the Scots’ football game against Forney.

We finished third in Feature Photography (Chris McGathey’s pictures of the Highland Park Bagpipe Corps and the Covenant School’s tribute to Carson Leslie) and fourth in Headline Writing (“Gordo’s Going Way of Dodo This Week,” “Dry Eyes Scarce as Dry Cleaners Merge,” and “Regionals? SEY LLEH!” — all by yours truly). 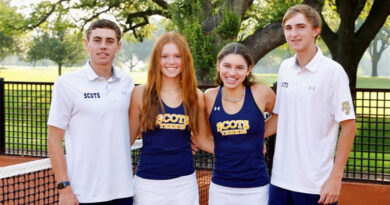 After a Century, Scots Still Holding Court in Tennis

Did You Get Another Mailer From Westcott?

Tying The Knot Soon? You Could Be Our Next Cover Bride