Take a look at Tomima Edmark’s résumé and you’re likely to get intimidated just a few lines in. After graduating with an MBA from the University of Texas, the petite blonde got her start working at IBM. She logged more than eight years at the tech superpower — and started her first business while working full time.

Inventor of the ’90s cult hairstyling tool known as the Topsy Tail, Edmark used her weekends and lunch breaks to fill orders and grow her business. And her dedication paid off; it wasn’t long before her side project was bringing in an extra $3,000 a month. She eventually left IBM and made millions on her invention before selling the rights to hair-care empire Vidal Sassoon.

Her early success came as no small surprise to those around her, although they’d be loathe to admit it. Edmark, who struggled with dyslexia and attention-deficit disorder growing up, said no one had any expectations for her.

“I was kind of like the wallpaper,” Edmark said. “Nice, but I didn’t stand out.”

And despite the success of her first venture, Edmark said she still felt like she had something to prove.

“I worried about being a one-hit wonder,” Edmark admitted. “But I had all of these ideas, and I knew there was more for me.”

So she wrote 12 books and invented a couple of other products — including a machine that used low-grade electricity to enhance the kissing experience — before settling into her latest and greatest venture: online retail.

After experiencing firsthand the fickle nature of fads and trends, and after having her products knocked off, Edmark was looking for a way to create a sustainable enterprise.

“I really wanted to build a business, an ongoing annuity that couldn’t be stolen,” Edmark said.

The owner of Her Room, which Edmark confidently claims is “the top online lingerie retailer based on revenue,” she has made it her mission to transform undergarment shopping from a troublesome-but-necessary experience into an enjoyable one.

“I didn’t want to just be another retailer,” Edmark said. “Success is not just about chasing a profit. I really want women to understand their breasts and learn to love their bodies, and the proper undergarments can help them do that.”

Guys are not excluded either; Edmark launched Her Room’s male counterpart, His Room, after realizing that the lack of online options extended to both sexes.

And while His Room is “just a baby compared to Her Room,” it continues to grow, Edmark said. Between the two sites, she offers more than 800 brands as well as tools, tips, and personal-shopping assistance to make the process as streamlined and enjoyable as possible.

Following up one successful start-up with another is difficult, said Jackie Kimzey, executive director of the Institute for Innovation and Entrepreneurship at UT Dallas.

“Everything you touch doesn’t turn to gold,” said Kimzey, who started a wireless company and grew it to around 1,400 employees before selling it. “When you’re starting a business, you get a lot of scar tissue, and that kind of teaches you what you shouldn’t do in the future. … But just because you’re successful once doesn’t mean you’ll be successful again.”

Don’t expect Edmark to occupy a posh corner office far-removed from her staff and customers — that’s the kind of behavior she shied away from in the corporate world.

“I learned a lot of lessons at IBM,” Edmark said. “My employees see me working, and I wouldn’t ask them to do anything I wouldn’t do myself.”

Staying in touch with customers is also imperative, Edmark said, and the reason why she reads 10 percent of the customer-service emails received daily and sometimes responds to them herself — under a different name, of course.

So what’s on the horizon for the serial entrepreneur? Although Edmark still gets asked what business she’ll start next, she said that she’s satisfied with her online-retail shops.

“I think this is my last hurrah,” Edmark said. “Now I know that I’m not a one-hit wonder, and I want to continue to build my company.” 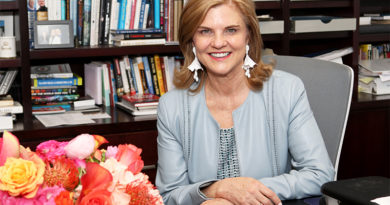 One thought on “Serial Entrepreneur Covers Top of Head to Tail”