Lublu Kira Plastinina, a Russian prêt-a-porter clothing line, will open its flagship U.S. store this May in The Plaza at Preston Center.

But the brand’s namesake has more on her plate than stocking inventory and keeping up with trends.

When she’s not traveling around the world to fashion shows and fabric exhibitions, Kira Plastinina is writing her honors thesis. Besides being a fashion designer, she’s also a 20-year-old junior at SMU.

And her age proves to be crucial when it comes to conjuring up designs for 20-somethings.

“You just kind of intuitively feel it,” she said.

The daughter of a Russian dairy mogul got her start with a significant investment from her father, but it has been her dedication to the company that has kept it afloat. After filing for Chapter 7 bankruptcy in 2009 and halting her plans to take the U.S. fashion world by storm, the quiet designer is ready for Lublu’s American debut.

In Plastinina’s words, the brand is “savvy, daring, and feminine,” a lot like Plastinina herself. Pieces include modest-length skirts, colorful frocks, and conservative blouses.

The current cover girl for the Kazakhstan edition of Forbes Woman, Plastinina has also been featured in the pages of Vogue Russia. Her company was named one of the most successful Russian firms by Forbes.

The communications major starts each morning with a Skype conference with her headquarters in Russia, and keeps up with her 250 stores spread across nations such as Russia, Italy, and Saudi Arabia.

But a busy schedule is exactly what she prefers.

“I just kind of grew up doing that,” she said between sips of green tea.

“It didn’t really make sense to spend so much time and energy making the fashion show collection and then not have it available to the public,” Plastinina said.

Even though she’s been at the helm of a global business since she turned 14, the doe-eyed Russian didn’t want to skimp on tradition.

“I wanted a college experience,” she said. “I’m very into school.”

So she packed her bags and headed to Texas, a state she was attracted to for the warm weather and “real” people.

Plastinina’s experience in the fashion world has contributed to her schoolwork, and vice versa. In Nina Flournoy’s communication studies course, her venture gave her a leg up on her classmates.

“She would apply the tactics to her real company,” Flournoy said.

But Plastinina was hesitant to spill the beans about her enterprise to her American friends, doing so only when it aligned with her assignments.

But Plastinina’s fashion house wasn’t what impressed Flournoy most.

“She doesn’t make excuses,” Flournoy said. “Just because she has all these things going on and has had brilliant success, it has not made her feel that she doesn’t have to go through the same steps that everyone else does.”

Now that she has surpassed the halfway point of her college career, Plastinina thinks it’s the perfect time to bring her threads to Dallas.

And there will be some stiff competition when doors open. The boutique is in a shopping center that already includes more than five boutiques catering to women. But management is antsy for Lublu’s arrival.

Cindy Morris, spokeswoman for The Plaza at Preston Center, thinks the store’s opening will be a win for shoppers.

“They will fit in beautifully and attract new customers as well because of Kira’s following,” she said. 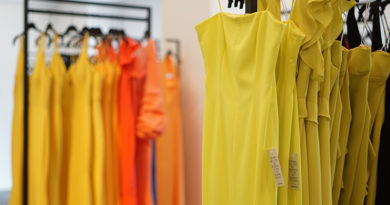