Several Highland Park athletes and coaches had a big weekend at the state swimming and wrestling championships in Austin, combining to win eight state championships and two coach of the year awards.

Individually for the Blue Wave, sophomore Annelyse Tullier won the 200 freestyle and tied for first in the 100 backstroke, while fellow sophomore Kate Boyer won the 50 freestyle. Highland Park also won gold in the 200 medley and 200 freestyle relays. Highland Park’s Jesse Cole was named the Texas Interscholastic Swimming Coaches Association’s Class 4A Swim Coach of the Year.

Across town at wrestling, freshman Nick Reenan capped his enormous year by winning a state championship in the 152-pound division of the Class 4A state tournament and being named wrestler of the year. Highland Park’s Tony Warren was also named coach of the year.

Make sure to look for full stories on both meets in Friday’s Park Cities People. 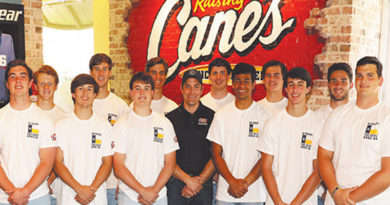