Here are a couple of factoids that may turn the stomach of one of Highland Park’s most famous residents, Dallas Cowboys owner Jerry Jones. The man who named the town was a packer, and the community’s original moniker was Philadelphia Place.

These are some of the revelations one finds when researching the life of John S. Armstrong. Although he didn’t live long enough to see it incorporated in 1913, Armstrong was the father of Highland Park.

In 1906, the Tennessee native and owner of the Armstrong Packing Company purchased the land that would become the town for a bargain: $276 per acre. Seventeen years earlier, a group of investors from Philadelphia had paid $377 per acre for the property that their Dallas agent, Henry Exall, intended to develop into a residential community called Philadelphia Place. But the financial crisis known as the Panic of 1893 slammed the brakes on those plans.

Armstrong sired more than just the town. He also had two daughters, Minnie and Johnetta, whose respective husbands, Edgar Flippen and Hugh Prather, became business partners with their father-in-law. Their Flippen-Prather Realty Company continued the development of Highland Park after Armstrong’s death in 1908.

Highland Park was not Armstrong’s first stab at residential development. In 1887, he and business partner Thomas Marsalis bought 2,000 acres on the western banks of the Trinity River that they called Oak Cliff. But their partnership dissolved after a dispute, and Marsalis’ further exploits as a developer were halted by the same crisis that derailed the plans for Philadelphia Place.

Before they set their eyes on Oak Cliff, Armstrong and Marsalis were two of the businessmen who created the Dallas State Fair and Exposition, a precursor to the State Fair of Texas. According to his obituary in The Dallas Morning News, Armstrong was the fair’s president for two years.

“Beginning in 1888, when the Fair was new and in a very shaky condition, it is said, he opened the exhibition once with his own financial backing and his courage was wonderfully rewarded,” the obituary said. “He placed the enterprise upon a solid basis and its credit has never since been questioned.”

Armstrong died at the age of 57, after he “was attacked suddenly with a sinking of the heart,” according to his obituary. Although his residence was at the corner of Ross Avenue and Pearl Street, he died at the Prathers’ home.

“Mr. Armstrong’s last hours were spent in the beautiful Highland Park addition north of the city,” his obituary said, “upon which he was in the process of expending more than $300,000 in making it one of the most modern and attractive suburbs.”

In 1914, six years after his death, the Highland Park Independent School District opened its first campus. A painting of the school’s namesake (shown here) still hangs in the back of the auditorium. 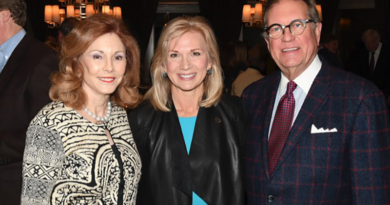