More than a week after Councilwoman Ann Margolin announced she would not be running in the 2013 City Council elections, a newcomer has emerged to vie for the future seat.

Leland Burk, a real estate investor and long-time resident of the district, is strongly considering his run for the District 13 council seat in May.

Burk said former Councilman Mitchell Rasansky and Margolin both factored into his future in Dallas politics as the two phoned him with the prospect of running. He said their leadership of District 13 has been outstanding, and, if he runs, he’s going to be a strong advocate for the neighborhoods as well.

Margolin asked Rasansky to think of good candidates for the future seat when she broke the news of her decision; he said he thought of Burk immediately.

Rasansky said he’s known Burk for nearly 20 years. He highlighted his skills as a businessman who has the city of Dallas at heart, but as one who “knows that he would have to protect the good neighborhoods that we have in District 13.”

The last District 13 recommendation from Rasansky was Margolin who won the seat in 2009. He said he wouldn’t ask somebody to consider running if he didn’t think they would do an excellent job in the horseshoe.

Look for more about Burk and his plans for District 13 in the Dec. 7 edition of Preston Hollow People. 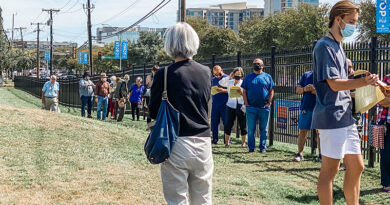 Read Local: How To Get A Neighborhood View Of The Election

Still No Challengers For Margolin’s Seat