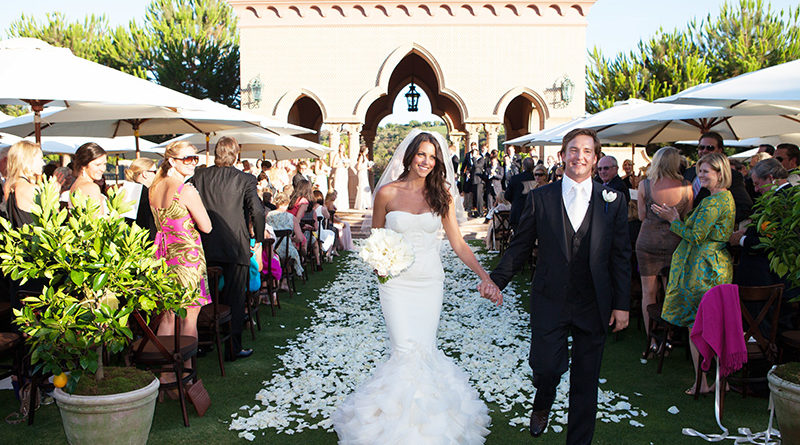 Stacy Adams and Mack Hicks exchanged wedding vows on the Aria Lawn at the Grand Del Mar Resort in San Diego on July 28, 2012. The lush lawn and Moroccan pavilion offered stunning views of the canyon preserve and golf course. Nuptial music was provided by friends of the couple during the service. On guitar were U.S. Marine Corps Capt. Russell Myers and Jo Seed, and on violin, the 9-year-old cousin of the bride, Eli Sonnenmair.

A seated dinner was held in the Capella Room, and when the guests were finished, they were led to the Manchester Salon for dancing by a six-man University of Texas marching band playing “The Eyes of Texas.” Dance tunes were provided by the Wayne Foster Band. The groom’s parents hosted a rehearsal dinner at the Museum of Contemporary Art in La Jolla, Calif.

The bride is the daughter of Frank and Ann Adams, and Lee Ann Stamm, of Dallas. The groom is the son of Tom and Cinda Hicks, and Luann Hicks of Dallas.

Presented in marriage by her parents, the bride was escorted down the aisle on the arm of her father, Frank Adams. The bride chose a lacy Vera Wang sculpted mermaid gown of stretched chiffon with lace trimmed veil, accented by her paternal great-grandmother’s pearl and diamond drop earrings, and she carried a bouquet of white calla lilies mixed with white French tulips.

The bride received a Bachelor of Arts in fashion merchandising from the University of Texas at Austin, where she was a member of Kappa Alpha Theta. She is a buyer for Neiman Marcus.

The groom received a Bachelor of Arts in history from the University of Texas at Austin, where he was a member of Sigma Alpha Epsilon. He is a vice president at Hicks Holdings.

Following their wedding trip to Bora Bora, the newlyweds have made their home in Devonshire.