When outgoing University Park City Councilman Jerry Grable took the dais for the last time yesterday, the room was full of those he’d served for and with.

And, in a room ready to honor him, he returned the favor.

In his farewell speech, Grable didn’t mention himself once, instead naming dozens of the city’s 265 employees, praising their efforts, their dedication, and their intellectual prowess.

“I see a lot of people here that have contributed to the city a lot more than I have,” he said.

The former Board of Adjustment chair and mayor pro tem was presented with a rocking chair from the city, so, in former Mayor Blackie Holmes’ words, Grable could “rock away for hours on [his] porch, watching the birth of the new YMCA.”

Grable lives one lot away from the YMCA, on Normandy Avenue.

The event was also the swearing-in ceremony for the new council, which mostly includes old faces. Incumbents Bob Begert, Tommy Stewart, and Bob Clark were joined by newcomer Dawn Moore on the council, and Mayor Dick Davis returned for a second term. Clark will now serve as mayor pro tempore, as appointed by Davis. 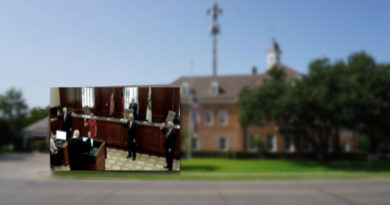 One thought on “Former UP Mayors, Councilmembers Return to City Hall to Fete Jerry Grable”