Although Frisco Wakeland has had a penchant for come back playoff wins against the Scots, Thursday night Highland Park shut down the Wolverines to pull out a 3-1 win in the first game of the Class 4A Region II quarterfinals.

But it didn’t come without a scare.

Junior Matt Wilson, who was able to scatter six hits throughout seven innings, gave up two hits in the bottom of the seventh to put the pressure on the Scots. After a RBI groundout, Wilson, now with two outs, did something he had done all night – strike them out looking.

All five of Wilson’s punch outs came with batters staring down breaking balls. The game was smooth sailing after HP took an early lead on Wolverine pitcher Hayden Nixon. Nixon who had one given up one earned run all year, let three slip out of his grip in the first inning. Nixon also gave up only his third walk in 49 innings of work.

Senior Griffin Gaule tacked on the last RBI of the first inning with a hard single up the middle. That hit bounced off of Nixon’s bare hand as he tried to paw at the line single. He shook of the stinger and then shut down the Scots offense for the rest of the game.

But those three runs was all Wilson and the Scots defense needed to hold down the first win of the series and claim their 11th straight win. Tomorrow they look to close out the series at 7:30 p.m. at Quik Trip Park in Grand Prairie.

In a side note:

During the bottom of the fourth at promptly 8:35 p.m., Wilson let loose on a fastball just as Quik Trip Park’s sprinkler system came on in the infield. The water caused Wilson to sink the pitch into Wolverine sophmore Ryan Perry’s back. Groundskeepers sprinted to shut the water off, and the umpire issued a do-over. 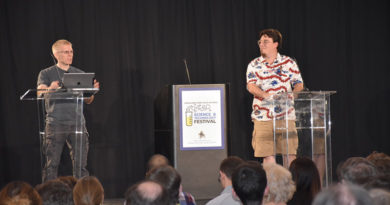 One thought on “Scots Take First Game Against Frisco Wakeland”