Amy Lee Lafitte and Robert Streeter Berry exchanged wedding vows September 24 at Highland Park Presbyterian Church. The ceremony was officiated by Dr. James C. Denison. A reception of dining and dancing to music provided by the band, Downtown Fever followed in the Grand Hall at Union Station. A rehearsal dinner was hosted by the parents of the groom at Hotel ZaZa on the evening before the wedding.

For her wedding, the bride chose an incredible gown by designer Monique Lhuillier called Bailey. The ivory strapless gown is made of a sheer silk organza, allowing the dress to move beautifully, while retaining a light, airy feel. The bodice was asymmetrically draped, adding emphasis to the waistline, with a hand tufted skirt featuring intricate floral bouquet accents on both the front and back of the skirt. To complete her look, the bride selected an organza edged veil made by Homa Bridal. The bride’s sapphire engagement ring, her “something old, something blue” was previously owned by the grandmother of the groom. She carried a bouquet of lilies of the valley.

The bride is a graduate of Highland Park High School. She received a Bachelor of Arts in American studies with a minor in business foundations from the University of Texas where she was also a member of Pi Beta Phi. She was employed by CBRE before her wedding and subsequent move overseas.

The groom is a graduate of the Episcopal School of Dallas. He received a Bachelor of Arts in government from the University of Texas where he was a member of Sigma Alpha Epsilon. He is employed by NTR Metals.

Following their wedding trip to Italy, the couple are at home now in London. 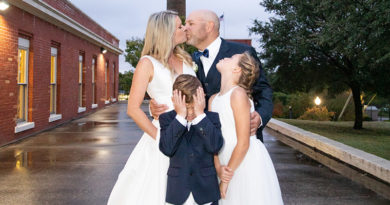