Megan Jane Parks and Thaddeus Francis Beckner first met in May 2005 while studying abroad at the University of Richmond in London. Friendship and a romantic courtship quickly followed. The couple exchanged wedding vows July 16 at the Lakeside Terrace at The Broadmoor in Colorado Springs, Colo. Their beautiful lakeside ceremony was officiated by Rev. Gary Snider. The reception was a seated dinner, followed by dancing in the Lake Terrace Dining Room at The Broadmoor.

The bride chose a formal gown of ivory tulle, designed by Liancarlo for Stanley Korshak. The gown was fashioned with a sweetheart neckline and a fitted bodice with an embroidered belt. The A-line silhouette featured soft organza and tulle petals which adorned the two-tiered skirt, and swept gracefully to a chapel-length train. To complete her ensemble, the bride wore a veil of sheer illusion.

The bride is a graduate of Highland Park High School. She received a Bachelor of Science in elementary education from the University of Texas at Austin and a Master of Education from Southern Methodist University. She was a member of Kappa Kappa Gamma sorority while studying at the University of Texas and a member of Pi Lambda Theta, an honor society, while attending Southern Methodist University. She currently teaches fifth grade at McCulloch Intermediate School.

The groom is a graduate of Greeneville High School. He received a Bachelor of Science in political science from the College of Charleston. He is an assistant vice president in the retail division of Henry S. Miller.

Following their wedding trip to Hawaii, the couple reside in Dallas. 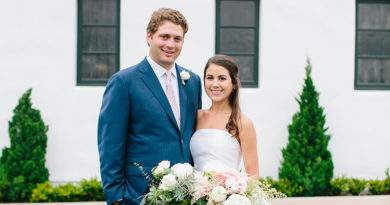 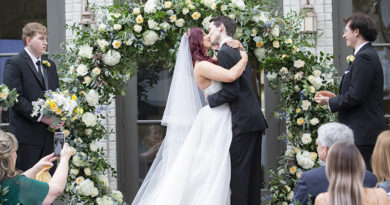 Love In The Time of Social Distancing