We’re slated for another full day of testimony in the Doe family’s civil lawsuit against the Episcopal School of Dallas. Jane Doe II, the victim, gave an emotional account yesterday of the entire affair from start to expulsion.

Notable witnesses yet to be called for the plaintiffs include: Erin Mayo, head of the Upper School, John and Jane Doe, the victim’s parents, and Chris Burrow, ESD’s former CFO.

This will be the last day of trial this week, and it will resume a four-day-a-week schedule on Aug. 22.

You likely know the drill by now, but I just finished writing the print story for this week’s edition of Preston Hollow People, hence the delay on posting updates. I’m running late to get back to the proceedings but I’ll give you a snippet.

Q: How many lawyers does it take to turn on a projector?

A: Judging by the size of ESD’s counsel, more than a dozen.

They finally get everything in order to show clips from Jane Doe II’s video deposition. Chrysta Castaneda asked her on the video, “Why didn’t you tell the truth to Mayo and Royall when they asked you the first time?”

Doe II said she was afraid that even though they said she would be able to stay at ESD that she would still be expelled if they found out.

“Because I was a victim. I was confused, and I was scared. I was betrayed by a teacher,” she said through tears and sobs.

Castaneda asks Doe II what she said after her parents told her she couldn’t go to ESD anymore.

“I said ‘I’m tired of being stomped on. I want a lawyer. This isn’t right,” she said. “I felt like my whole life was being taken from me … The school I went to since kindergarten was blaming me for what their employee did to me. It was horrifying.”

John Doe, Jane Doe II’s father, takes the stand. Cyndy Goosen, attorney for the family, asks him why he chose ESD to educate his four children.

“I thought it was a terrific school when I enrolled the first one there,” he says. “I was a lifelong Episcopalian and it was an Episcopal school. Those were all the requirements I had for a school.”

Doe says he felt supported by Rebecca Royall and Erin Mayo “at first” and even considered them his allies.

The first time he learned his daughter had been involved sexually with her teacher was around Dec. 10, in the office of Jane Doe II’s therapist.

Doe says they had not yet filed criminal charges but Jane Doe II had met with CPS because ESD called them.

Doe says he got a call from Father Stephen Swann, founder and headmaster of ESD, in December of 2009. Swann told him he couldn’t imagine what the family was going through and gave Doe his cell phone number with instructions to call him “24/7” if he could help in anyway.

“I remember telling him thank you,” Doe says.

This conversation apparently slipped Swann’s mind, who testified earlier that he never reached out to family prior to Jane Doe II’s expulsion because he thought it would be “inappropriate.”

Doe says although he wrote the number down, he never called Swann.

Aldous asks Doe about his mindset in the days following the Nov. 29 incident with Farmers Branch police officers.

“In the process of 10 days, I discovered my daughter was found in a parking lot and had had a sexual relationship with a teacher. I was devastated. In some ways I didn’t know what to do.”

Aldous brings up the Jan. 27 meeting with Royall, Mayo, and Doe when Jane Doe II was withdrawn from ESD.

Doe says he was offered the choice of withdrawing his daughter, getting his spring tuition money back, allowing her to have college recommendations, and not having anything on her transcript to indicate expulsion, or having the process to expel his daughter started.

“What was your immediate reaction to this news?” Aldous asks.

State Sen. Royce West cross-examines Doe, asking him if he had ever considered withdrawing his daughter before Jan. 27.

West reads a quote from Doe’s deposition, “I can tell you for everyday since they were discovered I have evaluated what was in [Jane Doe II’s] best interest.”

Doe says he doesn’t remember if keeping the relationship “hush-hush” ever came up in meetings with ESD administrators.

West asks Doe what his expectations were for his daughter’s education at ESD.

“My expectations were she would get a terrific education,” he says.

“I believe she did,” Doe says.

I walked in a bit late to find Castaneda nodding off in the back row and West arguing a motion before Judge D’Metria Benson.

“You’re just a squirrel trying to get a nut, is that what you’re saying Mr. West?” Benson says.

“I already have … I’m not going to say that,” West said with a laugh.

Gee, glad I rushed back from lunch/writing/blogging for that one.

Doe takes the stand again for the continuation of West’s cross-examination. Doe says he can’t remember whether or not he ever signed a contract with ESD for his daughters — or any of his children’s — education.

“Do you believe expelling your daughter was done to cover up the sexual abuse by Nathan Campbell?” West asks.

West asks if Doe’s other three children were “nurtured and got a great education” at ESD?

Doe says that they were.

“Does it seem odd to you that ESD would be nurturing to three of your kids and then kick out the last one for no reason?” West asks.

Goosen takes the witness on rebuttal and asks Doe is he feels he was deceived by the information presented to him in the withdrawal letter.

Plaintiffs call Jane Doe II’s coach to the stand. She says she’s not a full-time employee at ESD.

Aldous says it’s been inferred that the reason the coach has maintained a close relationship with Jane Doe II was because ESD told her to do so.

“Is that a misrepresentation?” Aldous asks.

“Yes,” she says, adding “No one ever told me I needed to continue to work with her. They told me I was allowed to.”

Aldous asks the coach if Rebecca Royall ever told her that Jane Doe II was “a little bit crazy.”

“That was inferred,” the coach says, explaining that before she contacted Jane Doe II after she learned she had been expelled, the coach called Royall and others at the school to make sure it was appropriate for her to continue to communicate with Jane Doe II.

“[Royall] told me I could continue to work with her but inferred hat she was a little bit crazy,” the coach says.

“Were you shocked that Royall said that?” Aldous asks.

“Yes, because it was contrary to what I knew of the student,” the coach says.

“Did you ever find Jane Doe II to be sexually suggestive?” Aldous asks.

“Did you ever find Jane Doe II to be overly friendly with any member of the teaching staff?” Aldous asks.

The coach says Jane Doe II called her on Jan. 31, 2009 (after she had been withdrawn from ESD) and was hysterical. She asked her coach to come over to the house. After confirming that Doe II’s parents were home, and calling the ESD athletic director, the coach agreed to come over to Doe II’s house.

“Was this the first time you knew she had a sexual relationship with Nathan Campbell?” Aldous asks.

“Yes,” the coach says, adding that the news hurt and shocked her.

“Did you see a change in Jane Doe II after she left ESD?” Aldous asks.

The coach says she noticed she seemed insecure, anxious, upset, angry, and frustrated.

“Do you consider Jane Doe II to be a good kid?” Aldous asks.

West asks the coach if she was concerned about having Jane Doe II around her family.

“Initially, I had apprehension and I wanted to evaluate the whole thing,” she says.

West goes to ask more questions on this theme and Aldous objects on relevance. Counsels approach the bench, and when West returns he doesn’t ask anymore questions about that.

“It was my choice, given to me by ESD, whether or not to help her,” the coach says.

Pass witness and the plaintiffs have no further questions.

Court is in recess until Monday.

Aldous announces that she has two matters that need to be heard by the court “on the record.”

Those matters will be the subject of a separate blog post tomorrow.

If Only Bagels Were Caffeinated 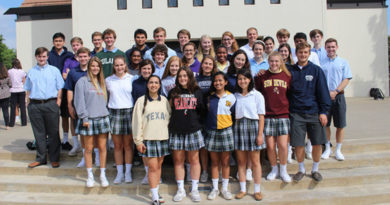