1. Highland Park High School is near the top of another national ranking list. And do note, as a commenter did when I blogged about the Washington Post‘s High School Challenge back in May, HPHS’ placement is actually No. 1 for comprehensive campuses. Newsweek‘s list is compiled differently than the Post‘s however, with (somewhat) less reliance on AP stats.

2. Highland Park Village is soon to be home to another eatery. Per a press release this week, Restaurateur Alberto Lombardi and Eric Brandt, sous chef at the Mansion, plan to open Bistro 31 in August near the Village’s founain — offering “Mediterranean cuisine with French, Italian and Spanish influences.”

3. Who’s ready for the Park Cities’ big July 4 parade? Just like last year, People Newspapers will have a float, games, and other surprises — plus (best part, best part) we’re bringin’ back the dunking booth! 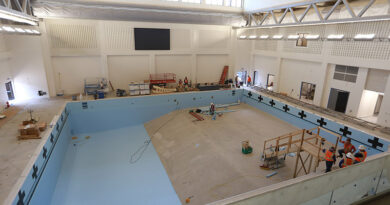 Scots Getting Facilities to Match Their Reputation