The groom is the son of Kurt and Sue Watson of Wichita, Kan. He is the grandson of Richard Larry Shields and the late Patricia Anne Shields, of Russell, Kan. and Dorris Watson McKinzie and the late Charles Nathan Watson of Hays, Kan.

For her wedding, the bride selected a silk charmeuse gown from the Vineyard Collection by Priscilla of Boston. The V-necked gown featured a deep V down the back with cascading ruffles flowing into a chapel-length train. The bride had a hand-made silk flower in her hair and a fingertip veil. She wore a diamond bracelet from her paternal grandmother and a diamond ring from her maternal grandmother.

The bride was given in marriage by her parents. Attending as man of honor (in lieu of the more traditional maid or matron of honor) was Andrew Boyett, the brother of the bride. Bridesmaids included Rebecca Wood Knapp, Elizabeth Ashley McCoy, Jessica Giles Gray, Meghan McGill Boyett, and Whitney Marcum Holofchak. The honorary flower girl was Avery Anne Muther, niece of the bride and groom, who was not in attendance. Serving as the flower girl was Beckley Rose Wilson, the cousin of the bride.

The bride is a graduate of Highland Park High School. She received a Bachelor of Arts in philosophy and political science from Furman University in Greenville, S.C., and a Master of Science in communication disorders from the University of Texas at Dallas. The bride is a speech language pathologist for Select Rehabilitation.

The groom is a graduate of Andover High School in Andover, Kan. He received a Master of Science in Management with a double concentration in finance and marketing, followed by a Master of Business Administration from the School of Management at Binghamton University in Vestal, N.Y. He works in Koch Equity Development at Koch Industries.

Following their wedding trip to Belize, the newlyweds will reside in Wichita, Kan. 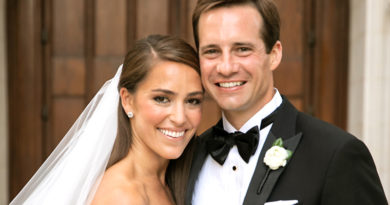