I say never trust a cliché.

Andrew Powers, the svelte executive chef at Trece, seems to enjoy turning stereotypes upside down. For example, you might assume a Mexican (not Tex Mex, mind you) restaurant wouldn’t serve a salmon amuse bouche appetizer. Or that if they did, it wouldn’t be any good.

My taste buds beg to differ.

As the sous chef at the famed Mansion Restaurant for two years, Powers worked under Chef Dean Ferring before jetting off to the Virgin Isles in 2005. In addition to enjoying island life, Powers served as a combination banquet and sous chef in Caneel Bay for two years, where he handled dinner parties for up to 900 people. In 2008, Powers came to Robert Colombo’s Trece as executive sous chef under Ruben Peck. In February of 2010, Powers made the leap to executive chef.

Powers chose a distinctly non-south-of-the-border menu to showcase the extraordinary items in his menu (and quite a few off of it). Laced with chipotle sauce, habanero peppers, jalapeno grits, and plenty of tequila, Powers’ creations pack a punch worthy of a Mexican restaurant. But the dishes themselves, (chipotle shrimp bisque, coriander crusted duck, poblano wrapped scallop, and coffee crusted beef), were a veritable United Nations of nourishment.

After serving in the Peace Corps in Ukraine, I thought I never wanted to see a potato on my plate again, but Powers managed to change my mind. The scallop, served with smoked tomato buerve blanc, goat cheese, and jalapeno grits, was my favorite dish of the night.

A chef after my own stomach, Powers used my staple comfort food as the basis for dessert. The roasted peanut flan with  caramelized bahns and a blueberry puree brought me back to, oh a couple of nights ago, when nothing looked good except a classic PB&J sandwich.

As I waddled out to my car, no doggie bag necessary, I couldn’t help but think that breakfast was going to be a supreme disappointment. 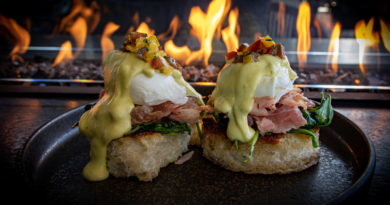 Friday Food Round Up

One thought on “Trece’s Chef Serves Up More Than Mexican”