If you’ve been in the Park Cities long, I expect you’ve either met, seen, and/or been smiled at — warmly —  by Liz Healy. A University Park native and the effervescent sister of a certain local Realtor (Rogers), Healy, 25, is SMU’s former student body president, too, and scarce to meet a stranger.

You can read up on hireastang.com, her newly launched business to connect odd-job seekers with employers (slogan: “There’s a Stang For That”),  in our last issue of Park Cities Two. In the meantime, some news from Healy: A Words With Friends tournament sponsored by her site netted $1,000 in its first day for Genesis Women’s Shelter.

“Should be fun to see how it pans out,” writes Healy, who went on to relay the following:

The official WWF Facebook fan page found out about it and I got a personal e-mail from someone at Newtoy, Inc., the developers of the game. They ended up posting it on the page, and now I have players from 14 different states! Just from their post, I had about 500 new hits on my website. Aaahhh, the power of Facebook …

Then came a love story, aided along by one of the website’s gimme shirts. Really.

HireAStang helped with a marriage proposal on Saturday! My friend needed an excuse to get his girlfriend to campus so he could propose, so I told her I needed her there to take a pic in one of my HireAStang T-shirts and she bought it! They went together, met the photographer, then I called to say I was running late but they should go ahead and get some cute shots first. When they started taking pics, my friend dropped to one knee and popped the question! She said yes, of course. They’re both good friends of mine so that was a lot of fun. 🙂 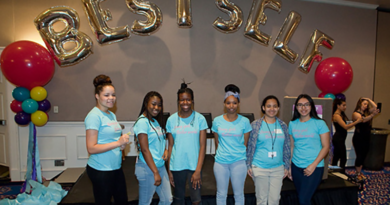 4 thoughts on “Need Market Savvy? There’s a Healy For That.”